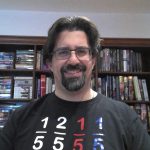 Shai Cohen has been at the University of Toronto for his entire adult life and has claimed that he is two years away from getting a statue in his honour for the past decade.  He studied Mathematics, English, and Philosophy as an undergraduate and generally feels qualified to discuss any topic as if he has a lot of knowledge about it.  Luckily, many of his students seem to find him somewhat entertaining and so they are tricked into sticking around for the learning part of his lectures.

Shai first became known in Engineering when he took over the teaching of a course in a semester where one professor was in the wrong continent, another passed away, one TAs was fired, another two quit, and someone pulled the fire alarm during the only term test.  He has since taught nearly every first-year math course in the faculty, holding his office hours in the Sandford Fleming cafeteria (affectionately known as The Pit) because it is a good way to reach out to the students and because it reminds him of the good old days of his early career.